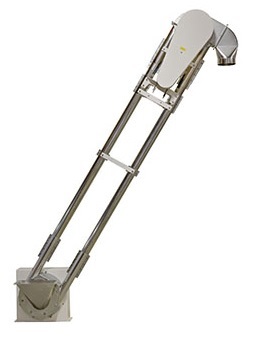 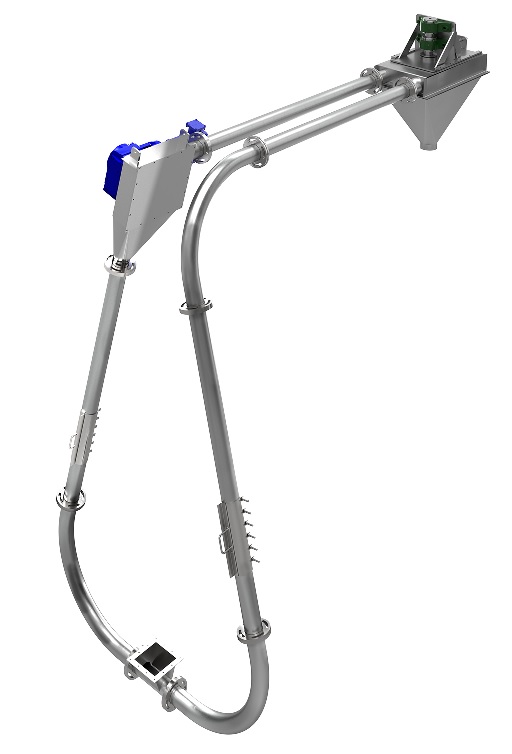 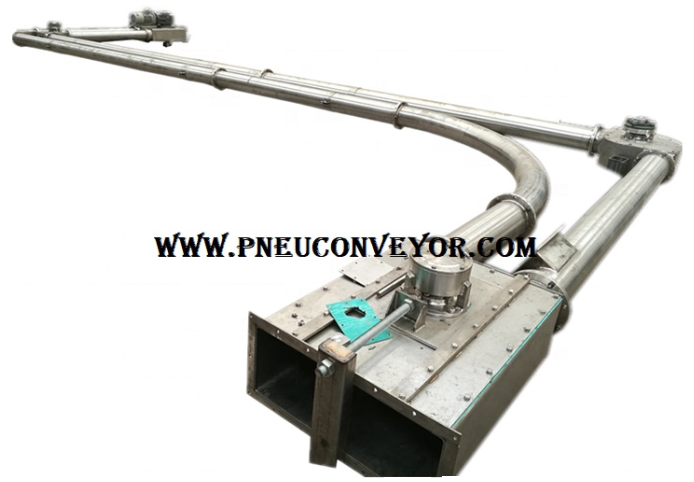 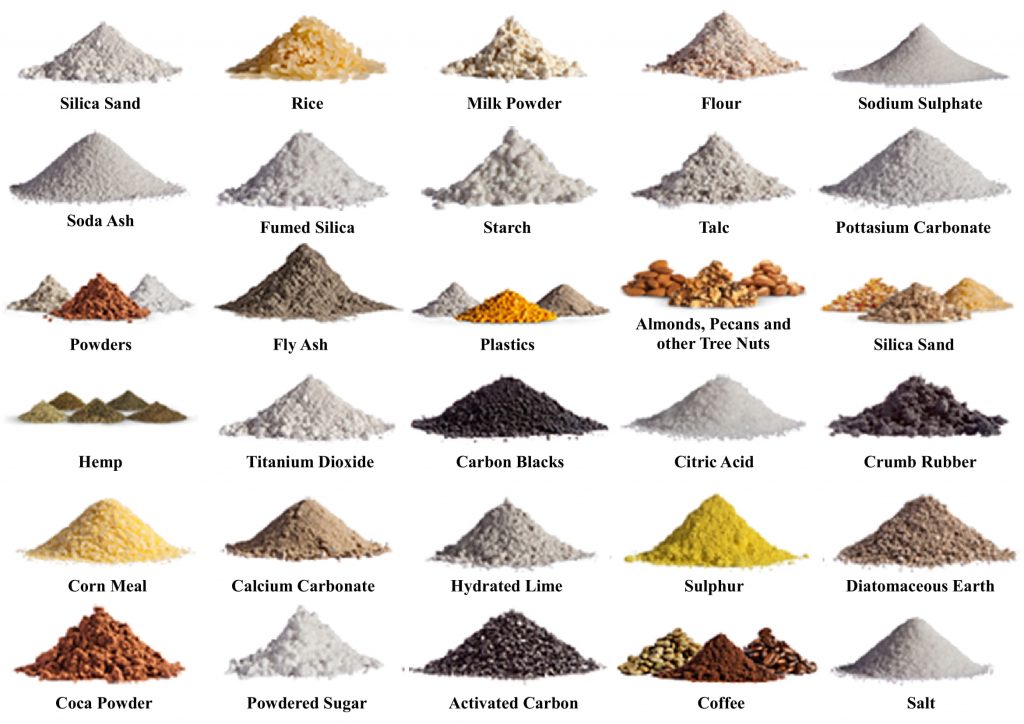 PneuCONVEYOR – Tubular Chain Design acts as a universal joint during product transportation in the pipe which enables a single conveyor to achieve directional changes in multiple planes, including 90 degree turn.

pneuCONVEYOR – Tubular Chain Conveyor system includes many accessories such as Brush Assembly or Chain Knockers for cleaning of the chain, Drop Bottom or Slide Gate Valves for immediate discharge of the product, or a Turn Station which replaces 90°elbows to reduce wear and tear on the discs & chain. The Tubular Chain Conveyor is the best solution for material handling applications. 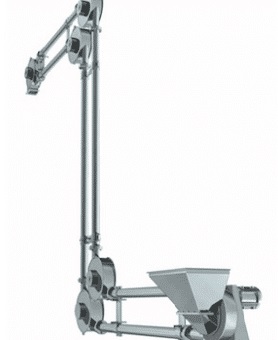 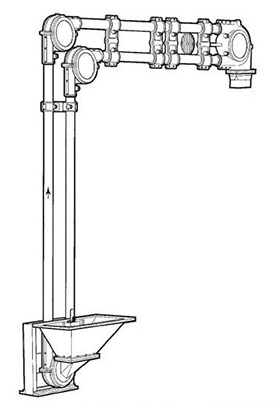 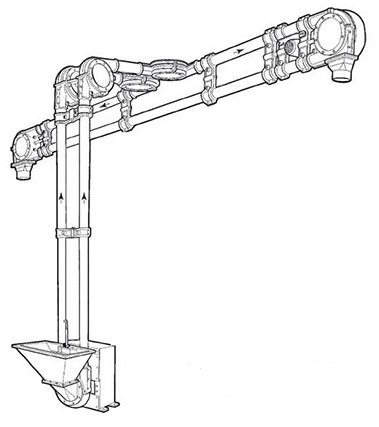 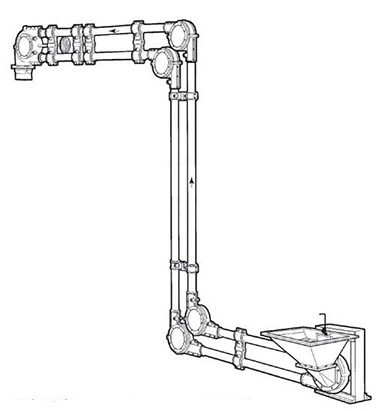 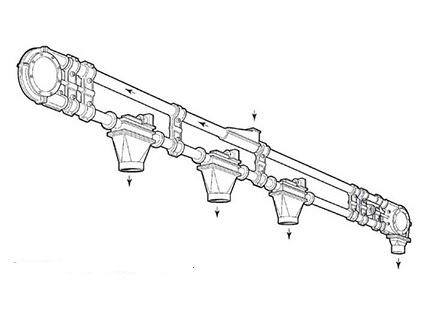 Descriptions:-  The tubular drag chain conveyor (also called a tubular drag link-chain conveyor ) provides gentle, enclosed continuous transfer of bulk solid materials, including fine powders, granules, pellets, and moist sludge’s, at any angle, in any plane, and around any obstacle. The chain links in the conveyor’s chain-and-disc conveying mechanism function like universal joints, enabling the conveyor to simultaneously move material in multiple directions and planes. The conveyor also has a low-profile, flexible design that allows it to fit into tight spaces around existing plant equipment.

Widely used in pharmaceuticals, Chemicals, Food, Snacks, Minerals, Dyestuff, Pesticides, Fertilizers, Plastics, Pint and other industries, the tubular drag chain conveyor can be equipped to handle highly abrasive or hot materials also, meet sanitary requirements for transferring foods and pharmaceuticals, and safely convey potentially explosive materials — all at a much lower operating cost than that of a comparable pneumatic conveyor.

How the conveyor works :-  Components : The tubular drag chain conveyor consists of a tubular housing enclosing a continuous chain mounted with solid circular discs (or flights), often called a chain-and- disc assembly, The housing can include straight and curved sections constructed of carbon steel or stainless steel pipe with a typical nominal diameter of 2 to 12 inches. The housing forms conveying and return lines that can be arranged in multiple configurations, including complex loops with several turns, to suit the application layout.

A drive sprocket engages the chain-and-disc assembly at the turn at the conveying line’s end. A shaft-mounted motor, often equipped with a variable-speed drive, powers the drive sprocket; the drive sprocket and motor form the drive assembly. An idler assembly (sometimes called an idler stationer tension station) is located at the end of the conveyor’s return line. The idler assembly consists of a housing enclosing an idler sprocket or other rotating mechanism and, in some cases, a chain-tensioning device. A conveyor with a complex loop arrangement can have a combination of several 90-degree turn assemblies (also called turn stations) and less-than-90-degree elbows, which allow the chain to turn and bend with minimal friction. Each turn assembly contains a sprocket or other rotating mechanism, which can be a powered or idler mechanism,  the elbows don’t require a rotating mechanism. Brushes or other devices can be located at the drive assembly and at various points inside the conveyor housing to clean material off the chain-and-disc assembly and prevent carry back in the return line.

where it falls by gravity out of the conveyor. As the drive assembly turns, the chain moves continuously through the housing, around the drive assembly, along the return line, and through the idler assembly and any turn assemblies. The powered or idler turn assemblies assist the chain movement through the bends, which reduces frictional drag and the conveyor’s power consumption. The close clearance between the discs and pipe walls prevents material from building up inside the conveyor.

Speed and capacity:- When the conveyor is equipped with a variable-speed drive, the chain speed can typically be adjusted over a range from 5 to 90 fpm. This allows the conveyor to handle a range of materials at various capacities without degradation or segregation. The conveyor can also start under full load after shutdowns. Conveyor capacity typically ranges from 85 to 2,800ft3/h, depending on the material’s bulk density and the conveyor’s pipe diameter and chain speed.

Configurations:- One tubular drag chain conveyor can typically move material up to 180 feet horizontally and up to 120 feet vertically. Several conveyors can be arranged in series to provide longer horizontal and vertical conveying distances. Multiple conveyors are also commonly used to move materials from different sources, such as storage vessels, bulk bags, and manual bag dump stations, to one destination, Most tubular drag chain conveyors have modular construction with interchangeable components, allowing the conveyor to be expanded or modified to handle changing production requirements.

Power consumption:- The tubular drag chain conveyor consumes relatively little electrical power because it typically uses one low-horse power motor and doesn’t require ancillary equipment such as a filter-receiver and rotary valves, as a pneumatic conveyor does. 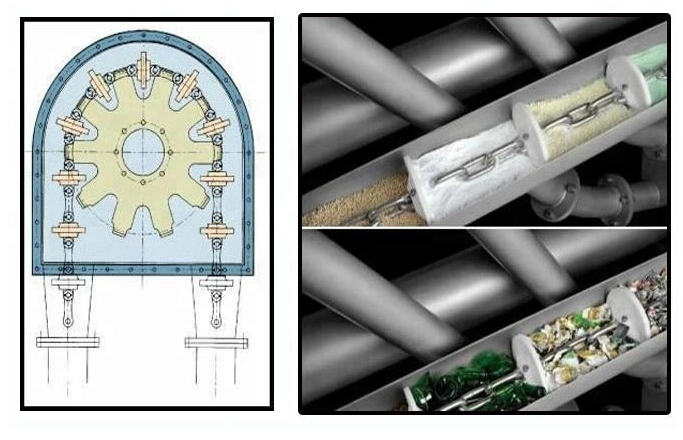 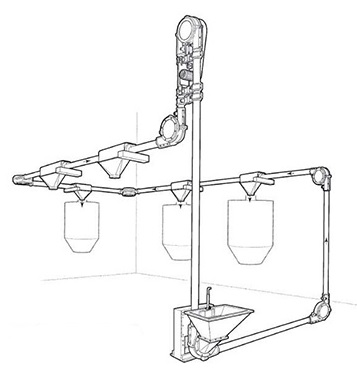 Application details:- The tubular drag chain conveyor’s gentle handling makes it ideal for moving friable and other delicate materials without degradation and for transferring blended materials with minimal segregation. When properly equipped, the conveyor can handle highly abrasive or hot materials and safely transfer foods and other sanitary materials. The enclosed conveyor reliably contains dusty and hazardous materials. The enclosed design also enables the conveyor to resist internal pressure build up caused by explosions and to contain propagating flame, making the conveyor suitable for handling potentially explosive materials.

The tubular drag chain conveyor isn’t suitable for handling a material containing rocks larger than 1.5 inches in a vertical conveying arrangement or in a configuration with multiple turns.

Available options :-  The tubular drag chain conveyor can be operated under pressure or vacuum. To handle a potentially explosive material, the conveyor can be purged with inert gas, such as nitrogen, and it requires less inert gas for this purpose than a pneumatic conveyor of comparable size.

The conveying pipe can have an abrasion-resistant lining, such as basalt, to handle highly abrasive materials. The pipe can also be fitted with jacketting that circulates a heat exchanging fluid to cool hot materials during conveying.

The conveyor can be designed for frequent wash down in clean-in-place applications, such as transferring foods and pharmaceuticals, with components such as quick-disconnect joints, FDA-approved Teflon / UHMW-PE discs moulded directly to a stainless steel chain, and stainless steel sprockets or other rotating mechanisms. Various clean-in-place components and drying-air supply systems to minimize cleaning downtime and labour. 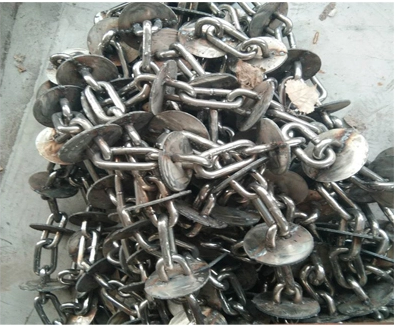 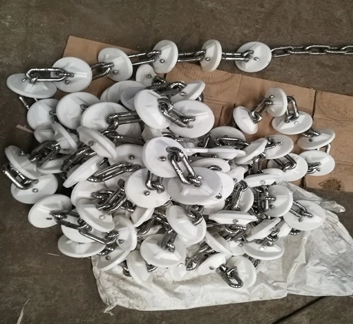